Comics: What's Up With That?

Here's my anti-comics manifesto, which it turns out is actually not one.

I wrote this thing a while ago and it seems to have gotten a response. It's one of my many rants about comics which includes a lot of what I've said here.

So I just did this convention. The people who organize it are great and it's always good to see old friends again, see what's new in the world of comics, and have conversations more than 140 letters. It wasn't like most comic conventions that smell like fast food full of guys without social skills, and the pageantry of conventions you always see on TV was thankfully absent. I'd do it again in a second.

BUT (you were waiting for that, weren't you? The word that negates everything you just said. Instead I'll surprise everyone by saying...)

THAT SAID, there must be more than seeing the same 200 people for the past 15 years. There has been some new talent and new fans in the intervening years, but it's few and far between. For the most part, everyone in comics I know now was in the twentieth century as well. It starts out like a fraternity hazing then eventually gets to be like Groundhog Day. Don't get me wrong, I enjoy the company and often the work of all these 200 people, but it seems so limited, not branching out, too much of a ceiling. Someone just said “You can't be responsible for the scene. Just keep doing what you do.” That's completely true, though doing what you do can sometimes be frustrating in a world where the audience doesn't change or expand, and it won't get any bigger than it's been.

Most people think of comics as heroic fantasy for teenage males. That is the bulk of the product. There's also another side, kind of the equivalent of independent cinema. I find that too to be similarly marginalized in its own way. While I like mopey comics about leaves falling as much as the next guy, I still find it stifling regarding my own status as a cartoonist.

I do silly surreal non-sequitur humor. Granted, the death of the periodical comic has kept me out of the public eye and I'm not as prolific as I once was, but I never left. People like what I do and it means a lot to me when someone tells me how it influenced their life. When someone says they've shown my work to other people. It has sometimes opened doors many of my peers are jealous of. I can see how it can be insulting, though, to someone who spends months working on a graphic novel and it gets the same attention as something I've spent three minutes on, sometimes directly in ink. It's not something in anyone's top ten canon when they think of comics, though.

I'll admit it, I can't draw for shit. What I do relies more on sense of humor and intellect and not skills. It's still legible. Nobody has ever said they can't tell what something is, only that it's not drawn as well as it could be. That doesn't matter to the general public, though. Walking out in the street, I see dozens of hipsters and every one of them would appreciate my cartoons if they knew they existed. No offense, but more so than something fully rendered with more substance. There are those like Chris Ware, Seth, and Daniel Clowes, all exemplary cartoonists I envy, but having a fine art and literary aesthetic I don't think would resonate with the general public. I find more of an affinity with people like Michael Kupperman, Tony Millionaire, and Johnny Ryan, all of whom are better than me at draftsmanship yet people who don't quite fit in to the general consensus of what “indy comics” are. The average person (I'm talking about our own circles, not red-staters that shop at Walmart) doesn't care about that kind of thing. They're not going to gamble with a $25 hardcover when they can take their chances with something for $4. Anyone who's seen Sullivan's Travels knows that people don't want to watch an arty picture, they want belly laughs.

I'm often told when I pitch projects that this is not what the market wants. I never tell them, but I don't think that they don't think it will sell, it's just that they don't want to be the ones to deal with it. I think ultimately it's a polite way of rejecting me. I don't blame them, since what I do is neither blockbuster material or prestigious. But most of all, it's not what the market wants mainly because they don't know it exists.

It seems to have been misunderstood as an anti-comics manifesto or declaration of my quitting comics. If anything, it's to get more people reading comics. I include myself as one of those “same old 200 people” and want to stay in that world. I'm only speaking for myself when I feel my own work is more comedy in comics form than “comics” and think there are venues other than the comics world. Think outside the pull box, if you will.

Going back to the incestuous world of comics, the eleventh issue of Smoke Signal has been published, with a cover by Charles Burns. There's also a six-pager from Michael DeForge and Benjamin Marra in material by Tony Millionaire, Kaz, Bill Griffith and Harvey Pekar, Zak Sally, Matthew Thurber, John Porcellino, Julie Delaporte, The Trubble Club, Jonny Negron, Travis Millard, Gary Lieb, a color centerfold of Michael Kupperman's
Moon 69, a back cover by Tim Hensley, and myself. 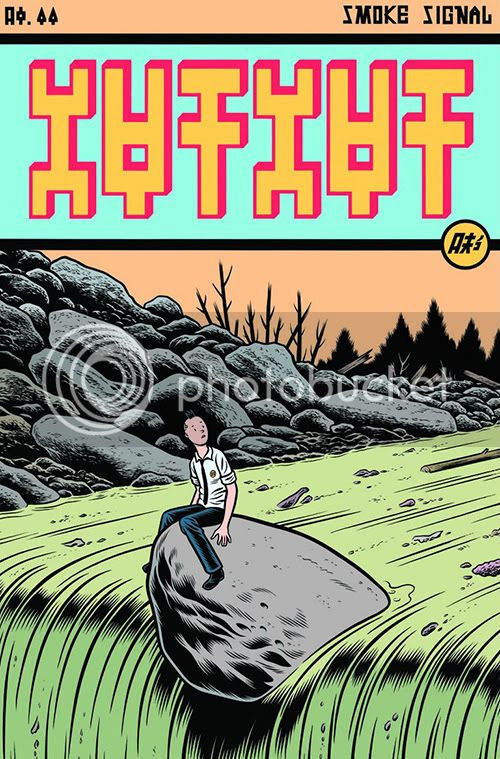 Sometimes I get weird unsolicited things in the mail. A few months ago I got this painting: 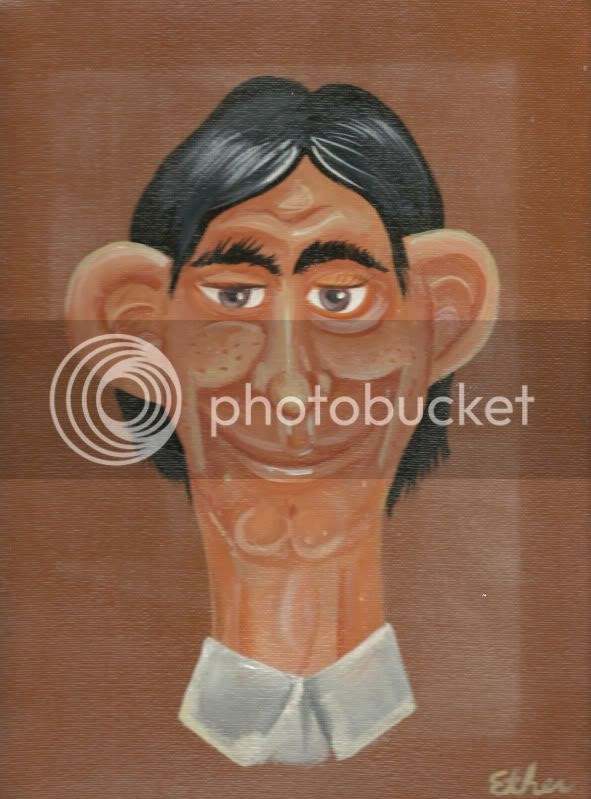 The return address is from “Scott Boyd” but the cover letter was from “Jimmy”. I don't know if they're the same people, but maybe he/they want to keep it that way. I'll send him/them a copy of FREE ICE CREAM. 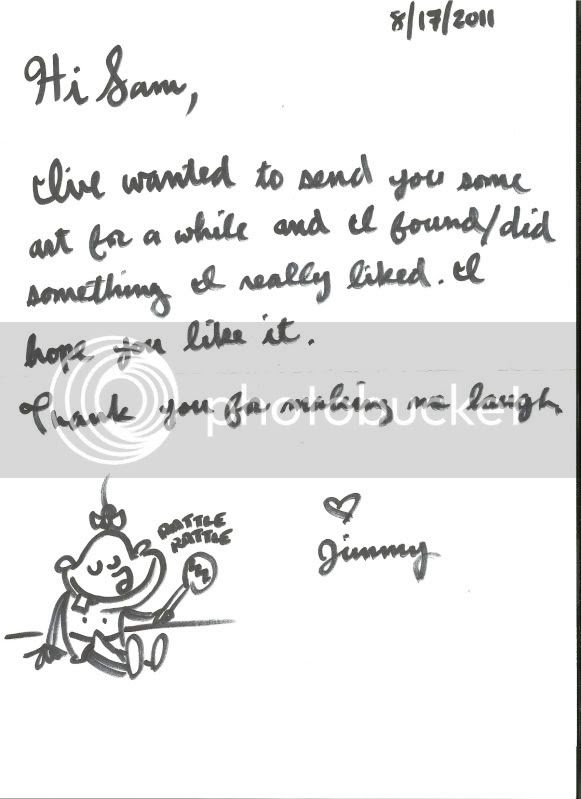 But that doesn't mean you'll get one, though. Remember they're only $3 and make the perfect stocking stuffer. You can get it by clicking three buttons instead of one, but in the future you'll be able to order things through thought transference. 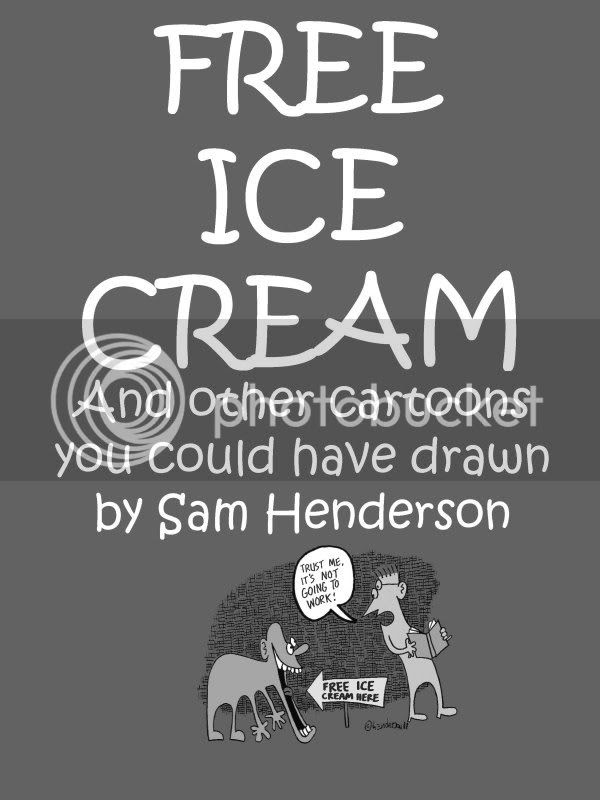